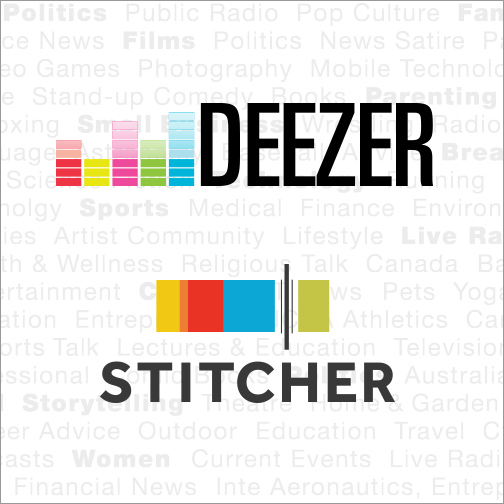 Music streaming service Deezer has today announced the acquisition of award winning radio app Stitcher, the San Francisco-based aggregator of podcasts and talk radio programming, which will soon give Deezer users access to over 35,000 radio shows. Subscribers will be able to access the best in entertainment and talk radio including NPR, This American Life, Freakonomics, Wall Street Journal, WTF with Marc Maron, Savage Lovecast, BBC, CBC and more.

“Stitcher is the leading on-demand internet radio service that features news, entertainment, comedy and sports radio. By giving you access to 35,000 radio shows in addition to 35 million songs, Deezer will bring you the talk as well as the tune.

Next year Stitcher will be integrated into Deezer, so you’ll be able to experience your favourite talk shows and podcasts whenever, wherever. We’ll also make sure to recommend shows that we know you’ll like, helping you to discover more gems like Nerdist, The Moth or Slate.com’s Culture Gabfest.”

Tyler Goldman, Deezer’s U.S. CEO, has said that users can continue to access Stitcher’s content through its standalone iOS and Android apps and website. “The bigger plan is to integrate Stitcher’s audio content into Deezer’s existing platform with 35 million music tracks, initially as a free service called Talk”, Goldman said during an interview. It must be noted that Stitcher is already integrated into over 50 car models from BMW, Ford, General Motors, Jaguar and Mazda, something that Deezer hopes to leverage.

Goldman and Deezer hope that this will help Deezer get its foot in the door with those carmakers and drivers by offering an all-in-one solution. “Deezer’s already with a number of auto players, but Stitcher has even more,” he said. “We believe that car manufacturers are looking for a complete solution, more content and global reach.”

The terms of the acquisition have not yet been disclosed by Deezer.