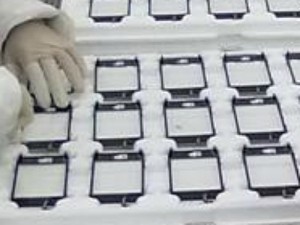 Earlier today another case was apparently leaked, this time from OtterBox clearly labeled with iPhone ‘4S’ on the packaging. As for the iPhone 5 itself, there has been no concrete evidence it even exists, aside from an apparent product page leak by Case-Mate, and a plethora of silicone cases made for sale (even some on Deal Extreme). Oh, but don’t forget Al Gore’s ‘confirmation’ of iPhones coming next month.

Now, Digitimes reports touch panels made by Wintek for the next iPhone are apparently succumbing to lower than expected yield rates, due to a ‘delayed bubble’ defect. According to iPhone supply chain manufacturers, this might cause a delay in shipments for the apparent October launch:

The defect, “delayed bubble”, is difficult to avoid during panel production, particularly when the defect is not detected during the process of laminating touch panels, and only later found during assembly, the sources said. Since the manufacturing process of touch panels used in iPhone 5 is of the same as that for iPhone 4, Wintek is expected to remedy the defect quickly, the sources indicated.

Wintek is just one of three companies responsible for the production of touch panels for the next iPhone, accounting for 20-25%, sources say. Two other companies based in Taiwan are reported to be making the rest, as TPK Holding accounts for 60-65%, and the others going to Chimei Innolux. Other info includes the plan to ship 25-26 million ‘iPhone 5’ units in the fourth quarter, according to sources.

Back in mid-August, purported images of the Wintek assembly line appeared online, showing workers examining next-generation ‘iPhone 5’ touch screens. Previously, the company has been in the news over the poisoning of workers exposed to n-hexane gas, used to clean touch screens for the iPhone and iPad.