WhatsApp Rolling Out Deleting Messages for All Recipients

The much awaited WhatsApp message recall feature or message deletion for all, that lets you remove a message you sent from a conversation on the recipient’s phone, is finally rolling out to all users. As reported by Android Police, a number of users have gotten a glimpse of the functionality in a beta version but now, the option appears to be rolling out to more and more WhatsApp users. 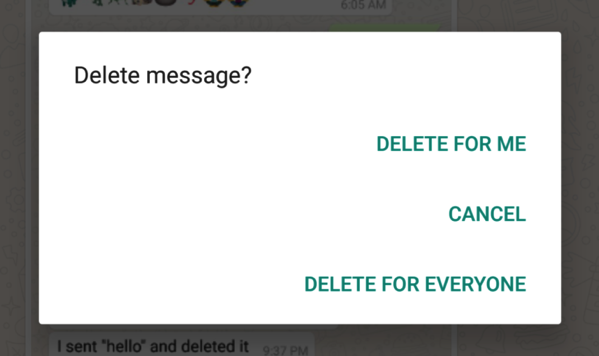 The feature can be quite handy if you sent a wrong message to someone or made a typo that you wanted to retract. As you can see in the above screenshot, the delete message popup on WhatsApp will show you a new option “Delete For Everyone”, using which will allow you to delete the message or messages from all the recipients’ phones it was originally sent to.

There are however some caveats, as reported by the source, with the first being you can only delete messages within 7 minutes of sending them.

“If you miss that short window, there’s no way to recall the message. Two is that if someone already opened and read the message, your deletion will only affect their ability to take a screenshot or search for its content later: they already saw it and that’s the end of it. Three is that you won’t be notified if message recalling worked on the recipient(s)’s end, so you can’t be sure if the deletion happened successfully or not.”

Let us know if the feature has been rolled out for you in WhatsApp since it hasn’t been turned on for everyone just yet.