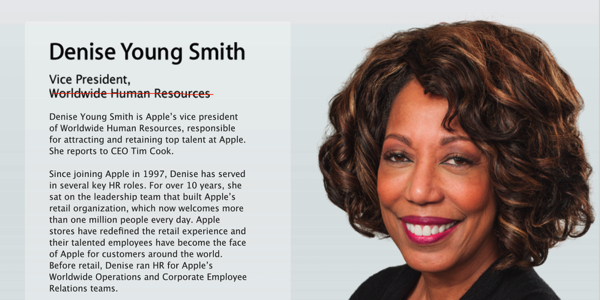 Denise Young Smith, Apple’s head of Worldwide Human Resources, will now run diversity programs for the company under a newly created VP position, 9to5Mac is reporting. Reporting directly to CEO Tim Cook, Smith’s new role going forward at Apple will officially be Vice President for Inclusion and Diversity. She has confirmed the new title today on her LinkedIn profile as well.

Denise Young Smith is Apple’s vice president of Inclusion and Diversity at Apple. She reports to CEO Tim Cook… Since joining Apple in 1997, Denise has served in several key HR roles. Most recently as Vice President of Worldwide Human Resources and Talent.

“Our inclusion and diversity efforts are critically important to Apple’s future. Denise’s years of experience, expertise and passion will help us make an even greater impact in this area.”

Smith has been at Apple for over 20 years and was first promoted to VP of worldwide HR back in 2014 from her previous role as head of HR for just Apple’s retail stores, a role that Steve Jobs handpicked her for during the early days of Apple’s retail efforts.

Apple’s previous head of diversity and inclusion Jeffrey Siminoff left the company back in January 2016 for Twitter. He reported to Denise who reported to Tim Cook, but now the Inclusion and Diversity team headed by Smith will report directly to Cook, making the new VP position the first to do so.

The source notes that Smith’s new position will mean Apple will be without a permanent VP of HR as Luca Maestri, the company’s SVP and CFO, steps in to fill the role temporarily.

DoorDash Canada has today released its 2022 End of Year Trends Report revealing the best and quirkiest food and ordering trends to come out this year. DoorDash saw a variety of food preferences in 2022, from the healthiest eaters and coffee lovers to good pet parents, and the biggest spenders. Torontonians tuned out to be...
Usman Qureshi
10 mins ago