Here’s What a Designer Thinks About the iPad Pro

Design director at Vox Media Carrie Ruby has shared her thoughts on the iPad Pro in an article over at The Verge, saying that after using the 12.9-inch device at work for a few days, it has exceeded her expectations. However, she notes that while the ability to move from app to app with ease or use multiple apps at the same time made the iPad much more useful, she still wasn’t able to perform all her day-to-day tasks on it, and ended up reverting back to her laptop apps. 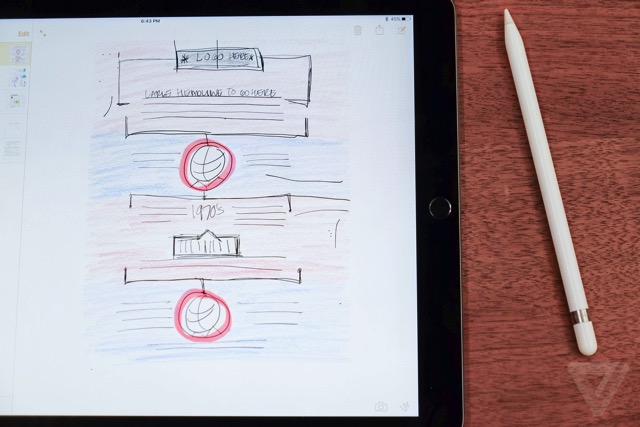 Ruby shares that a typical day for her revolves around various Adobe Creative Cloud applications. So when she got the iPad Pro, she immediately downloaded Draw, Sketch, and Comp, the mobile versions of the heavier desktop apps that she normally uses, but wanted to try and integrate them in her current projects and tasks into the various apps.

I particularly liked using Adobe Comp on the Pro. I could work this app into my daily workflow, for sure. Creating a wireframe was simple and fast. You just draw a box and quickly make an “X” in the middle and it instantly turns into a shape that you can move and adjust as well as fill with an image. Next, when you need a few lines of copy, you just draw a couple parallel lines and end it with a dot. This instantly turns into placeholder text. Images are easy to pop in and manipulate.

But I wasn’t quite as impressed with some of the other iPad Pro versions of the Adobe apps. For someone trying to do simple sketches or wireframes, the apps work. Anything heavier, I found too cumbersome and complicated to do, and ended up reverting back to my laptop programs.

Regarding the Apple Pencil, she says that it works extremely well. “I’ve tried a few different brands of styluses in the past, and never have I been wowed like I am with this one”, she writes. “It’s comfortable in the hand, it’s incredibly precise, and it felt natural. Using it with Apple Notes has virtually no lag. It’s fast and keeps up with my messy writing, almost making it better.”

You can read the interesting review in full at this link.