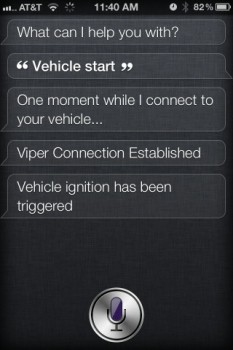 Brandon over at fiquett has figured out how to use Siri to control his car via the Viper Smart Start module installed inside his vehicle.

I created a new ruby plugin that is used by plamoni’s “Siri Proxy”, a proxy server for Apple’s Siri assistant. This proxy server allows for the creation of custom plugins that can intercept recognized speech and perform virtually any function imaginable (programmable, scriptable).

The “Siri Proxy” plugin I wrote handles interaction with a php script that runs on my web server. The php script, which I developed months ago for personal use, allows me to send commands to my car which has a Viper SmartStart module installed.

The current commands Siri will understand and execute include:

He has also updated his commands for conversational styles such as ‘start my car, lock my car, pop my trunk…etc’. Below are a couple videos showing his work in action:

That’s pretty awesome stuff. Next up, getting Siri to drive your car…maybe.