Update 1: Looks like there’s another “open letter” to RIM, part 2 documenting the same process, but it goes deeper into the app submission process. By a former RIM employee. 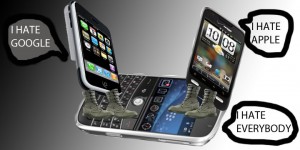 Fellow Canadian and Waterloo resident, Jamie Murai, recently wrote an open letter to RIM’s Developer Relations and detailed the highly complex steps required to register for RIM’s App World. As a developer for the iOS and Android, he breaks down how the App World SDK pales in comparison.

Here are the major points that opened my eyes:

On loading up the Playbook simulator on your laptop:
App World: requires a password and IP address
Apple/Google: n/a

To confirm your identity (this was shocking):
App World: print off a notarized statement of ID form, get it notarized with a government issued ID, and send it back to RIM
Apple/Google: n/a

On filling our your personal information:
RIM: requires filling out info FOUR times
Apple/Google: once

Apple had a head start with the App Store, and has surpassed 3 billion downloads and over 300,000 apps. Android development has also picked up steam, and is an incredibly popular platform to build on. It’s clear why RIM’s App World lacks the developers and great apps we see on iOS and Android–there’s more red tape to chug through compared to Apple and Google.

RIM Responds to Jamie in an Open Letter and Agrees

RIM responded diplomatically to Jamie’s blog post on their Developer Blog. Surprisingly, they agreed with all of Jamie’s critical points, and were honest to mention that the SDK requires improvement:

…The concerns he described were completely fair â€“ in fact, they include some of the priority items that weâ€™ve been working to improve prior to our final gold release.

…One example that directly relates to Jamieâ€™s feedback is that if you register an account on our Developer Zone web site, you can sign in with that account and download all of our tools without needing to re-enter your information several times. However, weâ€™re going to work on improving the download steps for those of you who just want to get at the tools without registering an account. I apologize that this was overlooked up until now.

RIM, please step up your game if you want developers to take your platform seriously. Also, feel free to release the Playbook, you know, if you want people to buy it.Â With rumours of Android apps to work on RIM products, could this signal that RIM has given up?

Any developers out there want to shed some light on comparing the SDKs of Apple vs Google vs RIM? After reading the above, would you want to create apps for the App Store or App World?