According to Jeff Scott from 148Apps, Apple is testing out promo codes for in-app purchases, based on a current promotion by EA Mobile and Fire Monkeys, which is allowing users (in the USA only) to receive 10 free gold (worth $1.99) by redeeming a promo code at this link from your iOS device.

Scott has shared what your iOS device looks like once you redeem an in-app purchase promo code and also what happens when you don’t have the app installed, which you are then prompted to install it:

Here's what it looks like after you redeem the code. pic.twitter.com/gR8h8YjFJh

And if you don't have the related app installed. pic.twitter.com/9DKOgnnnfW 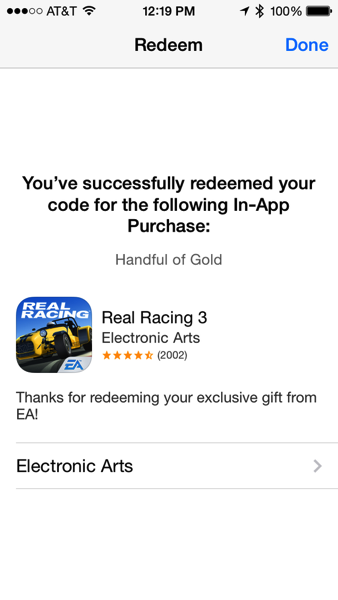 Back in December of 2010, Apple allowed worldwide iTunes accounts to redeem promo codes, which were previously restricted to U.S. iTunes Accounts.

As for this new feature to allow developers to give out promo codes for in-app purchases, I’m not sure what’s taking Apple so long to release it to the masses. Maybe they are allowing premium developers like EA to test it out first, it seems.