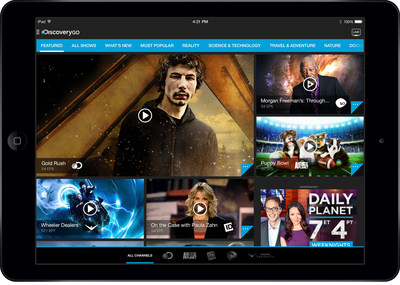 Today, Discovery announced that its specialty programming is now available on Discovery GO. The app is launching with an incredible 4,500 hours of content, which will increase to over 7,000 hours by January 2016.

The premium video streaming service will let customers access their favourite entertainment programs from almost any device. The content will be available to stream (live-stream and on-demand streaming) on smartphones, tablets, computers, and set-top boxes.

Discovery GO’s package offers programs from Discovery, Animal Planet, Investigation Discovery, Discovery Science, and Discovery Velocity. The package is free if you are a subscriber of a participating TV service provider.

“Discovery GO features all of Canada’s factual favourites in complete season stacks, including HIGHWAY THRU HELL, DEADLIEST CATCH, CLOSE ENCOUNTERS, SHARK WEEK, and HOW IT’S MADE, alongside current episodes of the network’s flagship daily science program, DAILY PLANET. Viewers can also enjoy Discovery GO exclusives like stunning CGI programs STRIP THE COSMOS and STRIP THE CITY, helping to make up the hundreds of titles and thousands of hours of truly awesome programming that is Discovery’s longstanding hallmark.”

In a statement, Vice-President and General Manager of Discovery Ken MacDonald said:

“This truly is the most robust and convenient one-stop shop for all of Canada’s favourite entertainment specialty programs.”

At launch, the service will be available through the web, via iOS and Android apps, and on set-top boxes. The service is partnering with several TV subscribers, including Bell Fibe TV, Bell Satellite TV, Eastlink, Shaw Cable, and Shaw Direct, to allow customers to use the service free of charge with their existing cable subscription. The company says that more streaming partners will be announced soon.

Discovery also announced that Discovery GO will become one of the first Canadian services to offer content in 4K Ultra HD.