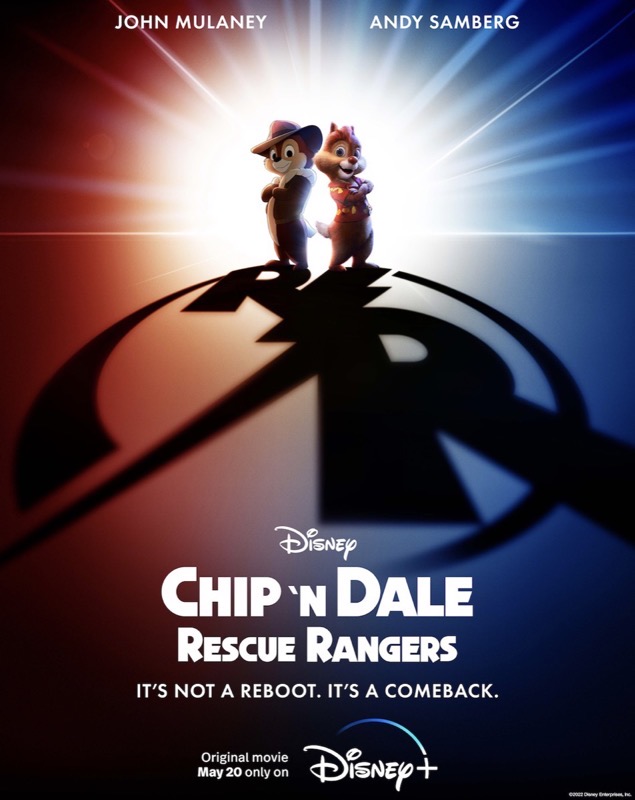 Disney+ Canada has released the first trailer for the upcoming original movie, ‘Chip ’n Dale: Resue Rangers’, set to stream on May 20, 2022.

Yes, this is a movie for the classic animated TV series we used to watch as a kid, and boy do we feel old. Disney explains, “a comeback 30 years in the making, the hybrid live-action/CG animated action-comedy catches up with the former Disney Afternoon television stars in modern-day Los Angeles.”

The movie synopsis is as follows:

In “Chip ‘n Dale: Rescue Rangers,” Chip and Dale are living amongst cartoons and humans in modern-day Los Angeles, but their lives are quite different now. It has been decades since their successful television series was canceled, and Chip (voice of Mulaney) has succumbed to a life of suburban domesticity as an insurance salesman. Dale (voice of Sandberg), meanwhile, has had CGI surgery and works the nostalgia convention circuit, desperate to relive his glory days. When a former cast mate mysteriously disappears, Chip and Dale must repair their broken friendship and take on their Rescue Rangers detective personas once again to save their friend’s life.

You can check out the first trailer for ‘Chip ’n Dale: Resue Rangers’ below:

The movie is directed by Akiva Schaffer, written by Dan Gregor and Doug Mand and is produced by Todd Lieberman and David Hoberman, with Alexander Young and Tom Peitzman serving as executive producers.

According to a ruling from the National Labor Relations Board (NLRB), Apple deployed illegal means to suppress unionization in Atlanta this year, Bloomberg is reporting (via MacWorld). The NLRB said that Apple violated federal law by “interrogating and coercing” employees, discriminating against union supporters, and holding mandatory anti-union meetings. While the labor board has no power...
Usman Qureshi
31 mins ago

Citing two sources close to the Indian government, a report by CNBC News is claiming that India is exploring options to bring some of Apple’s iPad production to the country from China. The officials are said to be in discussions with Apple executives regarding the proposal, the sources said. The Cupertino giant, which has been producing...
Usman Qureshi
55 mins ago