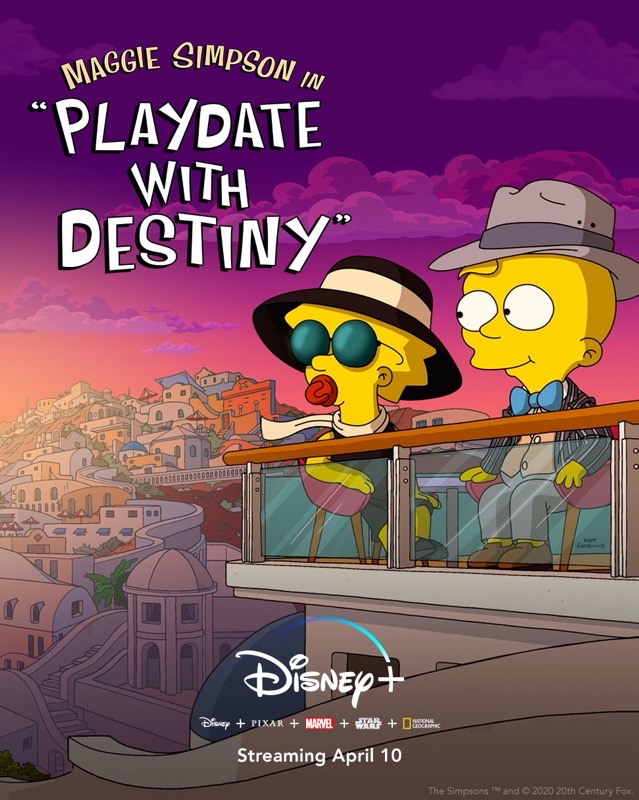 Disney+ has announced The Simpsons short film, “Maggie Simpson in ‘Playdate with Destiny’” will stream on April 10 in Canada and worldwide.

The news was shared by The Simpsons creator Matt Groening on Instagram:

The short film’s synopsis is as follows:

The film begins on a day that seemed like just another day at the park for Maggie Simpson. But when Maggie faces playground peril, a heroic young baby whisks her from danger — and steals her heart. After a blissful first playdate, Maggie can’t wait to see her new baby beau again the following day, but things don’t go exactly as planned. Will fate (or Homer) get in her way?

‘Playdate with Destiny’ was first released in theatres before Disney and Pixar’s Onward (which is also available on Disney+) and joins the other short film, “Maggie Simpson in ‘The Longest Daycare’ from 2012, which was nominated for an Academy Award.

Disney+ currently has 30 seasons of The Simpsons available, including The Simpsons Movie. Last week, Disney+ said it would be fixing aspect ratios of the first 19 seasons (and part of 20) to bring back the original 4:3 aspect ratio, by the end of May.

Yesterday, Disney+ announced it had reached over 50 million paid subscribers worldwide in just five months after its launch. Disney+ costs $8.99 CAD per month and comes with a free trial period.

1Password developers have just shared a preview of all the new features and improvements coming in their next major update, especially for iOS users. Reorder fields and sections inside items One of the biggest improvements in the forthcoming 1Password 8 update will be the ability to reorder fields and sections within items. "Just edit the item,...
Usman Qureshi
11 mins ago

Apple analyst Ming-Chi Kuo has today claimed in a series of tweets that only the highest-end 'iPhone 16 series’ model will feature a periscope camera lens next year. Earlier this month, a report by The Elec noted that the new periscope camera lens expected to debut this year exclusively in the iPhone 15 Pro Max will...
Usman Qureshi
36 mins ago

Instagram co-founders Kevin Systrom and Mike Krieger are making a return with a brand new project called ‘Artifact,' a personalized news feed driven by artificial intelligence. As noted by the Platformer, the app uses machine learning to understand your interests and will soon let you discuss those articles with friends. The company plans to let users in...
Usman Qureshi
57 mins ago