Apple Removes “Do Not Track” Setting From Safari 12.1 on iOS and Mac

As pointed out by Spread Privacy, the release notes for the newest version of Apple’s Safari browser show the company has removed the “Do Not Track” setting in order to “prevent potential use as a fingerprinting variable” or in others words, as a way to track people (via Business Insider). 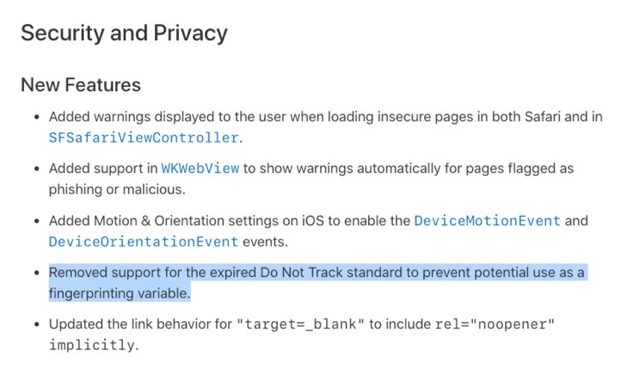 For those who aren’t familiar, the Do Not Track feature sends an invisible request on a user’s behalf to all the websites visited telling them not to track the person. Although the feature has been present on almost all browsers for many years, it doesn’t do anything because almost no websites actually honour the request.

According to Apple, the feature can, in fact, be used by some advertisers or scammers as a way to track your browsing across devices or websites. Hence in Safari 12.1, which is included with iOS 12.2 and macOS 10.14.4, Apple has decided to kill the feature permanently.

New features of Safari 12.1 include:

For the full release notes, hit up this link.

Samsung and LG are gearing up to start mass production of displays for Apple's first OLED iPads, according to a report from the South Korean publication ETNews (via MacRumors). The information comes from Ross Young of Display Supply Chain Consultants, a well-known industry analyst. According to Young, both South Korean display manufacturers will produce "hybrid" panels for...
Nehal Malik
16 mins ago

Google announced an experimental conversational service based on artificial intelligence today, called Bard, confirming what was reported last week. The details of Bard look to compete against the rise of Open AI’s ChatGPT, with the latter’s inventor backed by a $10 billion investment from Microsoft. On Monday, Google CEO Sundar Pichai detailed more about its […]
Gary Ng
48 mins ago