Do Turn by Turn Directions in Maps on iOS 6 Work in Canada?

Earlier we showed you a quick video preview of the new updated Siri coming in iOS 6, with tuned language support for Canadian English and French, along with local search support. We’ve had numerous queries asking about turn-by-turn directions in iOS 6 within the Maps app in Canada. Turn-by-turn directions appear within Maps, BUT… 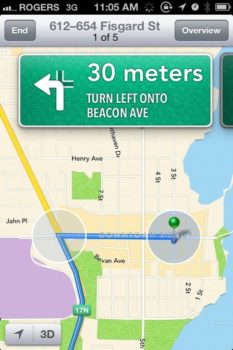 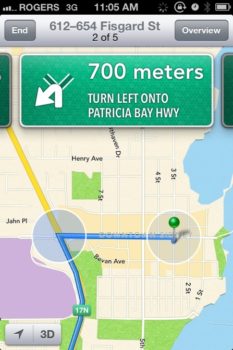 At this point in time, we must keep in mind beta means beta. Who knows what the final version of iOS 6 will bring, but from what we know turn-by-turn directions don’t work in Canada right now. The turn by turn feature in Maps is only available for the iPhone 4S, iPad 2 and new iPad.

On a side note, one of our readers commented he reportedly spotted vehicles decked out in TOM TOM logos travelling westbound on the Trans Canada highway ‘west of Regina’ last week. The vehicles were equipped with large antennas on the roof that looked like camera lenses affixed to them, similar to what a Google Street View car looks like. We have been unable to confirm this report yet.

Could this be part of Apple’s plan to build their own ‘Street View’? If you spot any TOM TOM vehicles in Canada, let us know.

Update 1: Looks like two other readers have spotted this mysterious Tom Tom car in Mississauga (today) and the south end of Ottawa (a week ago). Keep your eyes peeled and let us know, thanks!