Uber Clarifies its App Does Not Actively Track Users’ Locations

In response to earlier reports of Uber’s app continuing to check users’ locations even when they hadn’t used the service for many days, the ride-hailing service has today explained that the issue is actually being caused by iOS, and not by its app (via TechCrunch). Uber says that the behaviour is being triggered by the iOS Maps extension that Apple opened earlier this year and is not due to a bug in the Uber app. 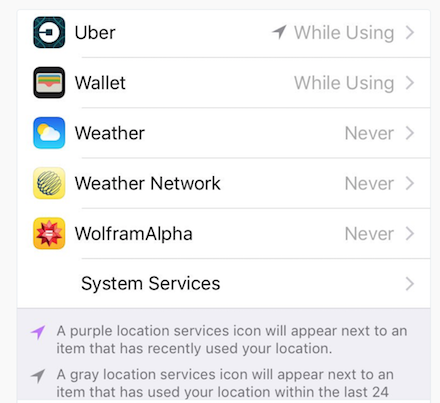 Last month, Uber announced that it would begin background collection of user data, but only for five minutes after drop-off, in order to improve drop-off and pick-up point accuracy in the future. However, many users felt uncomfortable about sharing this data. Uber investigated the issue today, and found the issue is related to the iOS Maps extension, which also explains why not everyone was noticing the continued tracking issue.

According to an Uber spokesperson: “For people who choose to integrate ride sharing apps with iOS Maps, location data must be shared in order for you to request a ride inside the Maps app. Map extensions are disabled by default and you can choose to turn them on in your iOS settings,” they said.

In other words, it’s not a bug, it’s feature. And it’s a feature of iOS.

Well, looks like Apple needs a new kind of indicator in the Location Services Settings, that tells users if it’s the app that’s accessing your location data, or if it’s the Maps extension.