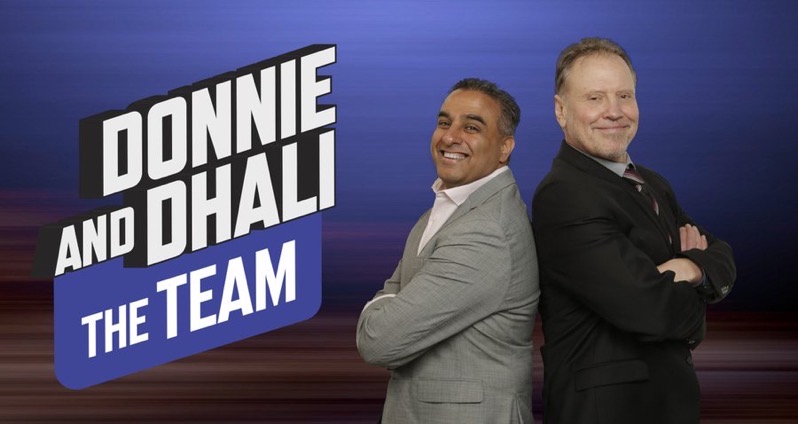 Last month, Bell Media suddenly shut down numerous radio properties, including TSN/Team 1040 based Vancouver, B.C., which took veteran and popular sports journalists Don Taylor and Rick Dhaliwal off air, as part of cuts in Hamilton and Winnipeg as well.

But that will soon change as both men, alongside producer Ryan Henderson, announced on Wednesday it will launch a new show, Donnie and Dhali – The Team, on April 5 on CHEK, based in Victoria. The show will air from 10 am to noon on weekdays.

“When TSN 1040 closed, a lot of fans were very disappointed. And so were we,” says Taylor, whom many know from his early days on TV via Sports Page.

“The fact CHEK is an independent, local, employee-owned station, made our decision to join them a no-brainer. Fans in the Lower Mainland, Victoria and throughout Vancouver Island are going to have a relevant show that reflects them,” added Taylor.

The show will also be available on all digital platforms, such as CHEKNews.ca, plus live and on-demand as a podcast on Apple Music, Spotify and other podcast streamers. There will also be a CHEK+ app coming for Apple TV, iOS, Android and Roku.

CHEK moved to an employee-owned model 11 years ago and Taylor, Dhaliwal and Henderson will also become part-owners of the station, a longtime TV channel in Victoria.

“This is a sports variety show,” added Dhaliwal. “A lot of fun, a lot of anarchy, free-wheeling. It’s gonna be a great ride and an antidote to all the bad stuff going on right now.”

CHEK Media Group Chair Levi Sampson said, “decisions are made here, not Toronto. We are delighted Rick, Don and Ryan are joining our team because team is what it’s all about.”