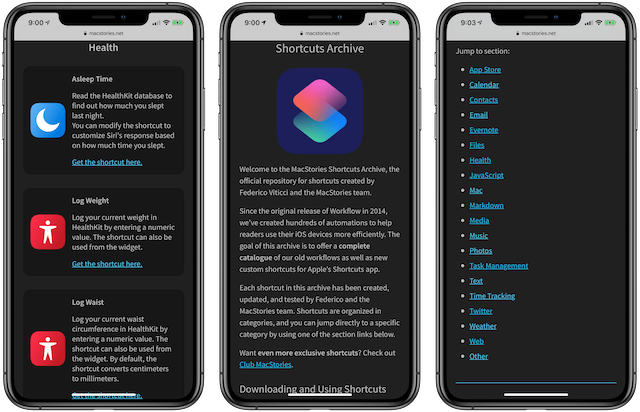 The folks over at MacStories have just released a dedicated repository for shortcuts called the MacStories Shortcuts Archive, containing 150 custom shortcuts for Apple’s Shortcuts app, with many more to be posted over time. You can download them all for free and even modify them to suit your needs:

“Allow me to offer some brief backstory for this. I was one of the original beta testers of Workflow – the app that Apple acquired and relaunched as Shortcuts in 2018. I started covering Workflow all the way back in 2014 when it first launched on the App Store and, for the next four years, I created hundreds of workflows for MacStories readers.”

Each shortcut has been created and tested by the MacStories team, updated for the latest version of Shortcuts app, and marked up with inline comments to explain what they do.

The initial collection of 150 shortcuts spans over 20 categories. From Health and App Store shortcuts to Markdown automation and Photos shortcuts, there’s a bit of everything in this archive.

Simply head over to this link to download the archive and feel free to modify, remix, and share your shortcuts with others.