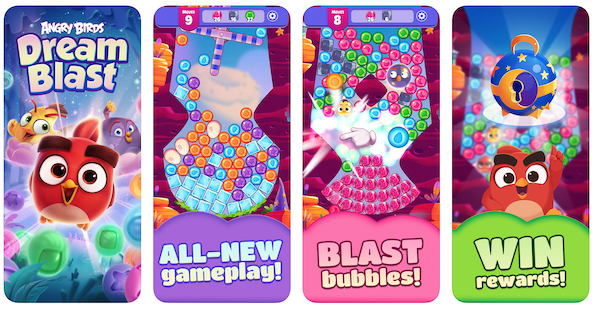 Rovio Entertainment has kicked off 2019 with the worldwide release of a free new game titled ‘Angry Birds Dream Blast’ which is now available for download on the App Store as well as on Google Play. The bubble-popping puzzle game features the young Angry Birds flock and introduces an all-new gameplay style.

“After billions of downloads across the Angry Birds catalog, fans have had plenty of time to get acquainted with the trademark temper of Rovio’s famous flock, but until now, we have been left to wonder what the trio was like before their first run-in with their piggy nemeses. Now with the global launch of Angry Birds Dream Blast, players around the world can take a first-ever peek into the early lives of the Angry Birds flock.”

Angry Birds Dream Blast takes a place among Rovio’s other puzzle offerings as the most instantly accessible game. “Time-to-fun is incredibly important to us,” says the head of Rovio’s Puzzle Studio, Heini Kaihu. “We want players to be having fun in our games within seconds of opening them.”

The game is quite simple to play. Users need to tap the colourful bubbles to clear all the matching bubbles in a group till they uncover Angry Birds characters which help them clear more bubbles.

To learn more and download, hit up the following App Store link.