Microsoft has finally announced the release of Cortana for iPad, just over two years after bringing its digital voice assistant to the iPhones. As reported by VentureBeat, the updated app boasts 20% faster launch times than the prior iPhone-only version, as well as a new interface optimized for 7.9-inch, 9.7-inch, 10.5-inch, and 12.9-inch displays. 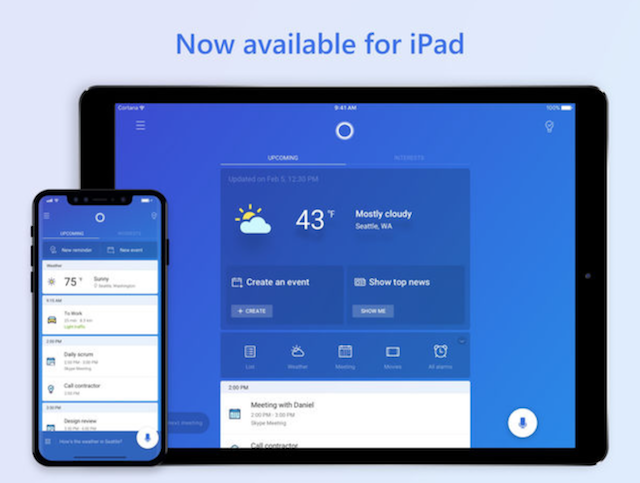 The iPad version of Cortana includes many of the features of the Windows 10 assistant. For instance, it can track your flights and packages, leverage awareness of your email to create reminders, and assist with calendar scheduling. And even though Cortana’s smooth voice sounds almost human when responding to requests, the assistant cannot be instantly summoned like Siri as per Apple’s regulations.

The release of Cortana for iPad comes at an interesting time — after some major developers have slowed development of their iPad-specific apps (or even killed them) in favor of web experiences, but amidst rapidly growing interest in smart speakers and digital assistants. Rivals Alexa and Google Assistant were amongst the most popular apps this holiday season.

As of last March, Cortana for iOS was only available in four countries. Today, the Windows 10 version is available in 13 regions, versus Siri’s current 36.

You can grab Cortana for iPad as a free update to the previous iPhone-only app by using the following App Store link.