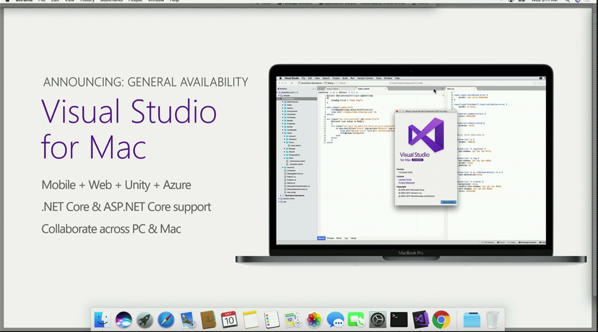 “Developers get a great IDE and a single environment to not only work on end-to-end solutions — from mobile and web apps to games — but also to integrate with and deploy to Azure,” Scott Guthrie, executive vice president of the Microsoft Cloud and Enterprise group, said in a statement. “Whether you use C#, F#, .NET Core, ASP.NET Core, Xamarin or Unity, you’ll get a best-in-class development environment, natively designed for the Mac.”

In November last year, Microsoft released Visual Studio for Mac preview and now, it’s finally out of preview. By bringing its IDE to macOS, Microsoft is encouraging Mac and iOS developers to use its development tools, since they will no longer need a Windows computer or virtual machine to do so. the company also plans to eventually discontinue Xamarin Studio.

Visual Studio for Mac supports native Android, iOS, and Mac development via Xamarin, and server development via .NET Core with Azure integration. For more information and download, visit this link.