DuckDuckGo Expands its Use of Apple Maps in Enhanced Searches

Earlier this year, privacy-focused internet search engine DuckDuckGo announced that its map and address-related searches for mobile and desktop are now powered by Apple Maps and now, the company is further expanding the use of Apple Maps for enhanced search while maintaining its commitment to privacy. 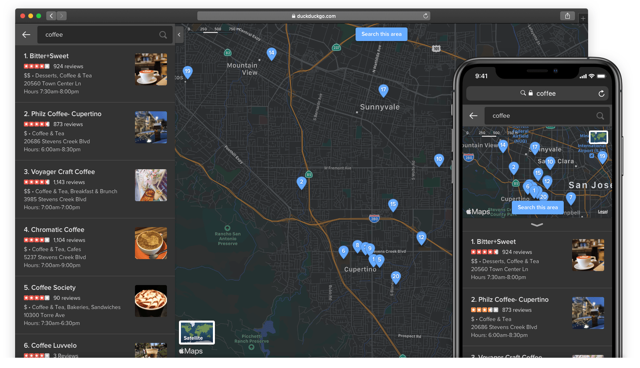 DuckDuckGo notes that with Apple, it does not share any personally identifiable information such as IP address in line with its strict privacy policy. Even for local searches where a user’s approximate location information is shared by the browser, DuckDuckGo discards it immediately after use.

Expanding its use of Apple Maps, DuckDuckGo now lets users stay in their expanded map view to refine local searches instantly. Moving around the map or zooming in and out will further enable users to update their search to include places within the field of view. Moreover, Apple-powered maps now seamlessly switch to dark mode when using DuckDuckGo’s dark theme:

A lot has changed with using maps on DuckDuckGo making it an even smoother experience, but what hasn’t changed is the way we handle your data—or rather, the way we don’t do anything with your data.

We believe there should be no trade-off for people wanting to protect their personal data while searching. Working with Apple Maps to enhance DuckDuckGo Search is an example of how we do this, and pushes us further in our vision of setting a new standard of trust online.

You can give Apple Maps a try in DuckDuckGo by searching for an address here.