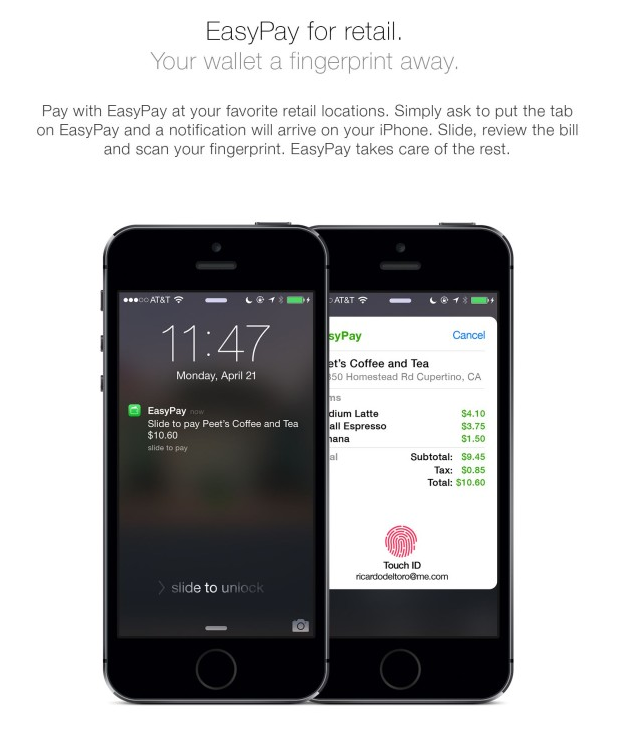 Over the past several months multiple rumours and reports have suggested that Apple is working on its own mobile payment system. Apple CEO Tim Cook has hinted about mobile payments in the past and made it really clear that Touch ID will be an integral part of their solution.

Ricardo Del Toro, an interface designer and software developer, has created a concept for a mobile payments system on the iPhone, and its called EasyPay.

With WWDC around the corner, I thought about the future of Touch ID. Touch ID is great, it’s incredibly accurate and works incredibly really fast. However, I would like to see Touch ID used in other areas, specifically the area of payments. I decided to design EasyPay. The idea of EasyPay is to build an API for developers. Ideally, developers would incorporate this system into their apps and enable people to buy physical things, one example would be Amazon. In addition to iOS apps, this functionality could also be available on the web. Keychain is a step in the right direction, but it could be a much better experience. At checkout, the card would slide up and when Touch ID recognizes the correct fingerprint, it would initiate the payment through the iTunes payment system. The other possibility is retail. Implementing this type of experience in a retail environment is a more complex implementation. My idea for the experience of the transaction is this: walk into a coffee shop, or any retail environment and ask for the tab to be placed on EasyPay. EasyPay would send a notification to the iPhone in front of the counter using iBeacon technology and when Touch ID authorizes the payment, the iTunes payment system would direct the requested amount to the retail location.

The retail implementation is a fairly complex one with a lot of old infrastructure to consider. I believe the future of mobile is payments. There’s a lot of room for improvement in that area. 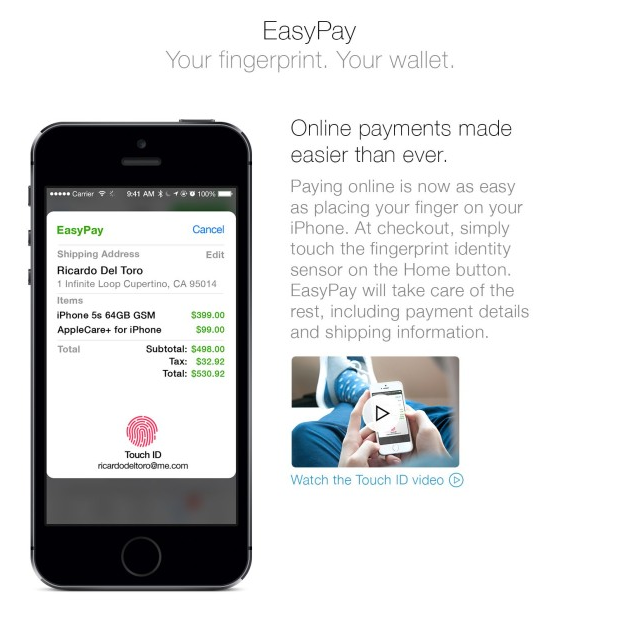 During Apple’s quarterly earnings call in January, Tim Cook suggested that Apple is interested in stepping into the mobile payments industry. Rumours have pointed to a possible partnership with PayPal, but it is still unclear what Apple has planned.