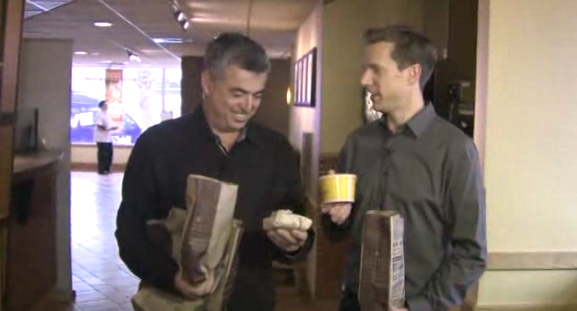 And since you cannot make a good decision on an empty stomach, the duo kick started their holiday shopping spree with a snack at Panera Bread, and used the restaurant chain’s app to pre-order a meal for two . . . and they used Apple Pay to checkout. Then they walked into the store, where their order was ready for pickup. It looks like the snack was on Eddy Cue, who paid for it using a gold iPhone 6 Plus.

Cue and DeMuro continued their shopping at Bloomingdale’s, buying sunglasses, then stepped into the Disney Store. At their second stop, a signature was required to finalize the purchase, which Cue explained as a necessary step over a certain amount to prevent fraud, even with Apple Pay.

Their shopping spree ended at the Apple Store, where Cue explained that while the latest-generation iPads include Touch ID, they can only be used to finalize in-app transactions with the built-in fingerprint sensor.

Eddy Cue betting that Apple Pay will revolutionize how we pay for goods. It’s safe, easy to use, and participating retailers such as Whole Foods and McDonalds have seen a rapid growth in Apple Pay transactions.