Earlier this month, the Dropbox iOS app received a handful of new features, including “Save to Dropbox” App Extension which allows users to save PDF versions of websites from Safari directly to their Dropbox accounts. Today, the company has announced that integration of Adobe in its iOS app to make working with PDFs in Dropbox simpler and faster is now live and ready to use, which enables users to easily edit PDFs stored in Dropbox straight from their iPhone, iPad and iPod touch devices. 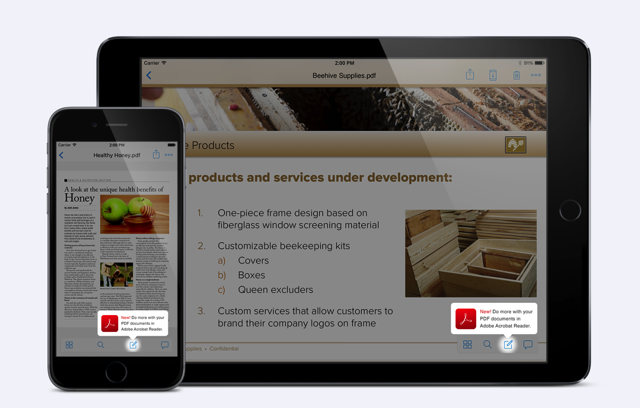 The updated Dropbox and Adobe Reader iOS apps let you annotate and comment on PDFs stored in Dropbox, right from your iPhone or iPad. Just open a PDF from the Dropbox app and tap the ‘Edit’ icon, then edit or electronically sign the PDF in the Acrobat Reader app. All your changes will save back to Dropbox, so you and any collaborators will have the latest version.

Furthermore, editing PDFs stored in Dropbox when you’re at your computer is now equally simple as well. Just connect your Dropbox account in the Adobe Acrobat or Acrobat Reader desktop apps, and you’ll be able to pull up any PDF in your Dropbox right from the Adobe app.