Today, the Electronic Frontier Foundation (EFF) published its rankings of how the top technology companies handle user data, and WhatsApp has fared the worst of all companies listed. 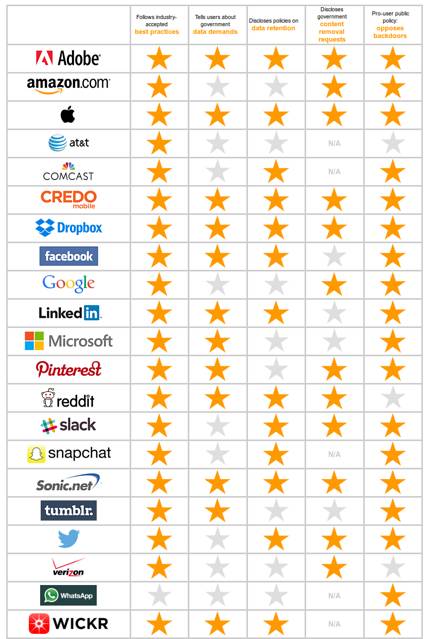 Apple received praise from the EFF for how transparent it is when it comes to handling government requests and standing up for user rights and privacy. On the rankings scale, Apple scored a perfect five star rating, alongside Dropbox. Last year, Apple also received a perfect score, however, three years before that they only had one star. This shows how far Apple has come in the past few years.

“This is Apple’s fifth year in the report, and it has adopted every best practice we’ve identified as part of this report. We commend Apple for its strong stance regarding user rights, transparency, and privacy.”

Apple’s CEO Tim Cook has been very vocal about security and privacy over the past year. Earlier this year, Cook gave a speech regarding cyber security during an award reception.

Google only received three out of five starts, while Facebook received four stars. In order for Google to increase their ranking, the EFF says that Google needs to be better about informing users about requests for their data. WhatsApp received a mere one of out five stars.