Today I’m happy to be reviewing an iPhone Game App created by a fellow Canadian. And later this week stay tuned for another review of an App from the same developer made specifically for Canadians. We’re definitely living up to our .ca around here.

The Game I’m talking about is MakeMeSay. It’s the iPhone version of CatchPhrase/Taboo (complete with mildly annoying buzzer!). It doesn’t take a Rocket Surgeon to quickly figure out the settings and hop into a game. All you need is 4 or more players (2 person teams),  choose how many rounds you want, the categories you want, the time limit/word count per round and you’re off! 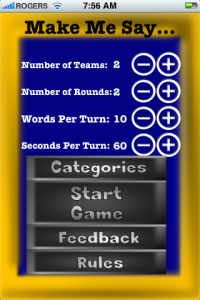 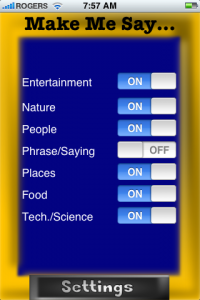 Once the rounds are over, the game tally’s the points and tells you the winner! I had a blast playing with my family and was genuinely impressed that we did not get a repeat word the entire time we played.  Now, obviously, some of the words are much more difficult than other, but I didn’t think that any of them were impossible.  The game Chimes when you state that you got a word right, Buzzes when you accidentally disqualify a word, and repeatedly buzzes when you’re running out of time. Although not pleasant to hear, it was definitely effective. 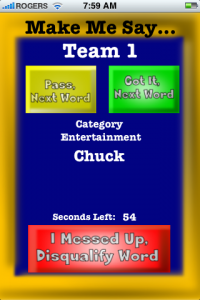 The only real part of this App that is lacking is the Graphics. Simple, yes, but not very appealing (as you can see from the screenshots above), this is not something I would even mention if it were a Free App, but for a paid App it would be nice for it to have a bit more polish.