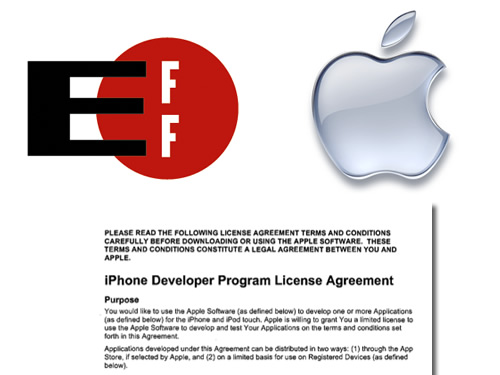 The Electronic Frontier Foundation (EFF) has long supported the jailbreak community, and now they are openly calling on Apple to free up their iOS devices, in what they refer to as Apple’s ‘beautiful crystal prisons’:

Apple’s recent products, especially their mobile iOS devices, are like beautiful crystal prisons, with a wide range of restrictions imposed by the OS, the hardware, and Apple’s contracts with carriers as well as contracts with developers. Only users who can hack or “jailbreak” their devices can escape these limitations.

The EFF also details four rights people should enjoy when they purchase a smartphone or computer:

1. Installation of arbitrary applications on the device.
2. Access to the phone OS at the root/superuser/hypervisor/administrator level.
3. The option to install a different OS altogether.
4. Hardware warranties that are clearly independent of software warranties.

Part of the argument by the EFF is backed by former words spoken by Apple co-founder Steve Wozniak, in Sydney, Australia:

I think that Apple could be just as strong and good and be open, but how can you challenge it when a company is making that much money?

Should iOS be more ‘open’? Of course it should. But then it would change the user experience for all of us, altering the original purpose of its simplicity. I can’t imagine handing an iPhone to my parents that would allow unlimited access to the OS and allow complete freedom to do anything they wanted. I’d be dealing non-stop with once again becoming the ‘tech support’ for everyone, similar to when I formerly used a PC extensively. Want more options to tinker? Jailbreak. Want even more? Go buy an Android phone.

You can read the rest of the EFF’s ‘open’ argument here.