Apple today announced that enhanced editions of all seven books in J.K. Rowling’s Harry Potter series are available exclusively on the iBooks Store in 32 countries for $11.99 (CAD) each.

The books feature the full original text, interactive animations, author annotations and elaborate artwork that bring these stories to life in a special way.

“I’m thrilled to see the Harry Potter books so beautifully realised on iBooks for the digital world; the artwork and animations in these enhanced editions bring the stories alive in a delightful new way,” said J.K. Rowling.

“Harry Potter fans are going to love how their favorite stories come to life,” said Tim Cook, Apple’s CEO. “J.K. Rowling’s legendary series is perfect for enjoying on your iPad or iPhone and we’re thrilled to offer them exclusively on the iBooks Store.” 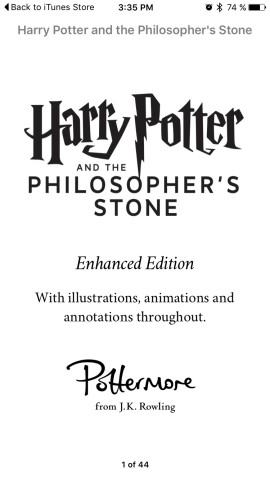 The digital versions of the Harry Potter books were previously available only through the Pottermore Shop, but that changes today: iBooks users can download the books, which feature new exclusive custom covers for each title, great typography, including the custom Harry Potter typefaces, and new section headers.