Less than three months ago, the iPhone App Store had just hit 500 million downloads. It’s hard to believe that in less than three months, that number is encroaching close to 1 billion! Read my lips: 1 billion downloads of either free or paid apps! That is pretty amazing when you think of it, and the App Store has definitely becoming the iPhone’s defining moment (aside from OS 3.0 coming this summer).

To celebrate this upcoming achievement, Apple has announced their 1 Billion App contest. All you have to do is download a free/paid app and you will be automatically entered to win a $10,000 iTunes Gift Card, an iPod touch, a Time Capsule, and a MacBook Pro. This contest is open to most countries in the world and is one heck of a prize pool!

At the time of this post, the app downloads counter is at 929.4 million downloads. With just over 71 million downloads to go, I wish all of you luck in this contest! Let’s hope a Canadian will run away with this prize, eh? 🙂 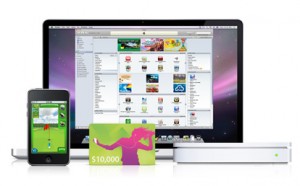 PS – You can also enter the contest without downloading any app at all. Just click here to enter to win without purchase (you can enter up to 25 times/day). Last time I tried the form ended up being buggy, let’s hope Apple fixes it soon!