The Government of Canada announced today Canadians can now receive weather alerts via Twitter for over 830 communities. The automated weather alerts are issued by Environment Canada’s meteorologists when dangerous weather conditions are on the horizon. 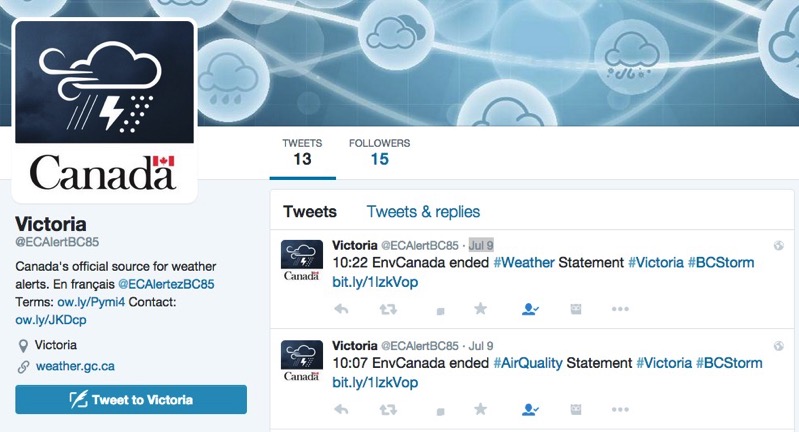 Each Twitter account for over 830 communities found here include French and English accounts, with alerts sent to 24 hours per day, all year round. Annually, Environment Canada expects over 25,000 alerts sent in total nationwide for the new system.

Leona Aglukkaq, Minister of the Environment, said in a statement “Our Government is committed to ensuring Canadians have a weather forecasting system they can rely on to give them timely and accurate information. As more Canadians are using social media to stay informed, this new service will play an essential role in ensuring public safety by providing Canadians with expanded access to severe weather information.”

The government collaborated with Twitter Canada for the project, which comes part of a public investment announced earlier this year to fund $134 million to improve weather forecasts and warnings for Canadians.

Steve Ladurantaye, Head of government partnerships at Twitter Canada noted “We are happy to have played a role to developing this unique way of sharing weather alerts with Canadians. Our work has resulted in a tool that allows more Canadians, media, businesses, municipalities and emergency organizations to have access to timely and location-specific severe weather information via Twitter.”

By using the official Twitter iOS app, you can setup push notifications when your favourite account tweets, so you’ll be notified in real-time. How to find your city or area’s Twitter account for weather? Just visit Canada.ca/weather.