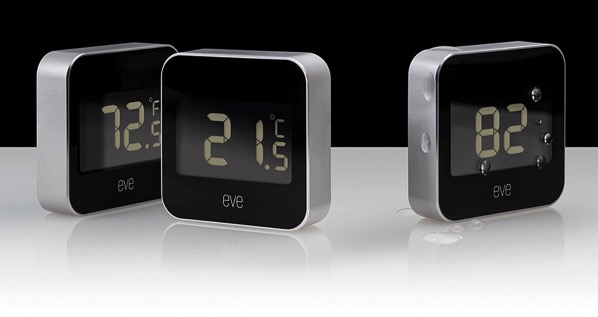 Elegato has just debuted its new HomeKit-enabled ‘Eve Degree’ wall-mountable temperature and humidity sensor, with a built-in display for showing the current temperature right on the device (via Pocket-lint). The miniature device runs off a replaceable coin cell battery, and is capable of monitoring both indoor and outdoor temperatures between zero degrees to 130 degrees Fahrenheit, as well as humidity levels throughout the house.

Eve Degree measures 54 x 54 x 15mm, with a minimalist square design and a big central information display. The device has an aluminium body and a IPX3 certification, which makes it safe for mounting outdoors. Temperature, pressure and humidity information can be viewed on its LCD display, via Siri or in the HomeKit card. If you have a fourth-generation Apple TV, then Eve Degree will also play its part in your HomeKit smart home.

Observing current conditions is convenient, but delving into historical detail is enlightening. Eve Degree connects directly to your iPhone or iPad, so you can view eye-opening graphs by day, month, or year. And make smarter decisions that endure.

Thanks to Apple HomeKit technology, Eve Degree works seamlessly with fellow connected accessories. Have your fan turn on automatically when the temperature spikes. Or let your humidifier take over if the air becomes too dry. That’s the beauty of a connected ecosystem. It exists to serve you – without you having to ask.

Elegato’s Eve Degree is available for pre-order from the product’s official website for US $69.95.

Today Apple announced its Q1 2023 earnings, reporting $117.2 billion in revenue and net income of $29.9 billion for the December quarter. Revenue was down 5% year-over-year, affected by production disruptions in China due to COVID-19. Apple CEO Tim Cook told Reuters in an interview that production disruptions are essentially over, as they “lasted through […]
Gary Ng
10 mins ago