Every Apple.com Homepage Since 1997

This is my favorite Flickr page. It displays the Apple.com homepage over the years, going all the way back to 1997 when Apple was using a serif font to display its name. 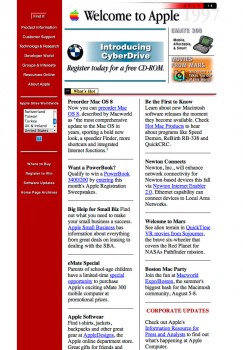 Going through the stream felt like taking a trip though some of the happiest moments of my life. There are also some gems that I didn’t know about or had simply forgotten. For instance, finding out that that Final Cut Pro 3 won the 2002 Emmy for Engineering, as well as being reminded of all the swipes Apple has made towards Microsoft.

The photos were collected by Flickr user flstclan, most of them between 2005 and 2007. Since then he’s been keeping up to date with each iteration of Apple’s homepage.

There are a few mistakes. An obvious example is that the site indicates that Apple won the Emmy in 2004, instead of 2002. If you can find others, please share in the comments.