iPhone hackers iH8sn0w have released a Mac version or their popular Windows application, “f0recast“. F0recast easily allows you to find out what device you have, what firmware you’re running, what baseband you’re on, and whether or not you can jailbreak and unlock said device.

iH8sn0w released the Windows version a while ago, but now that the Mac version is finally here a lot more of us can enjoy it. Generally, you won’t need to use this very often, but it is a great tool for someone who wants to jailbreak their Apple touch device, but doesn’t know where to start. 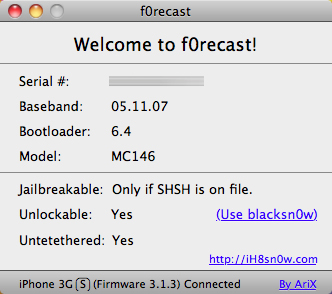 As you can see from my screen shot, f0recast also tells you your bootloader version. If you have an iPhone 3G, and your bootloader is 5.8 or later, you are able to downgrade your baseband, if you need to unlock. F0recast also lets you know if your jailbreak will be tethered or untethered. Newer bootrom devices will get a “No”, next to Untethered.

So, it looks like my iPhone can be jailbroken and unlocked, hooray! ;-p. F0recast is available now for Mac and Windows, for free!. Go get it and try it out! Hey, check me out on Twitter, and over at iEvolution and Green Candy.