Facebook yesterday announced its 2016 Q1 earnings, and with it came a ‘Community Update’ on the number of users that make up its platforms. In a post on Facebook, CEO Mark Zuckerberg shared how the social network now has 1.65 billion users, with most of them accessing the site on mobile:

Our community now has 1.65 billion people. In the last few months, we launched Reactions, rolled out Live video, built Messenger into a platform, shipped Oculus Rift and have now connected 25 million people to the internet. We’ve also worked day after day on lots of small improvements to make your experience better. 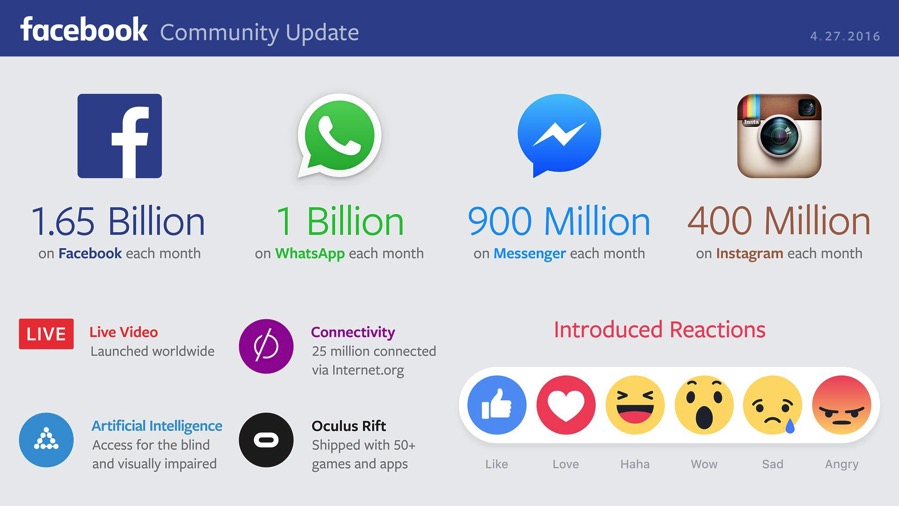 Facebook saw $5.4 billion in revenue for the quarter, with 79% coming from mobile advertising, beating Wall Street estimates by earning 77 cents per share, sending the company’s stock up seven percent after their earnings were released.

Compared to the previous quarter, that’s a growth of 60 million users for Facebook in just three months. For WhatsApp, its user base increased by 100 million to 1 billion, while Messenger saw a similar increase to reach 900 million monthly users. Instagram didn’t see a major increase though, remaining at 400 million users (a new iOS app redesign may try to change that).

Soon, the entire world will be connected to Facebook one way or another, it’s inevitable.