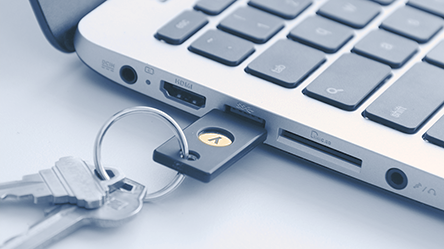 As part of a security and privacy revamp, Facebook announced today that it will start offering users a new authentication procedure. The new system will rely on a physical security key to perform extra authentication before an account can be accessed.

Starting today, the social network will support security keys, USB thumb drives that plug into a Mac or PC, which use the FIDO Alliance’s open Universal 2nd Factor (U2F) standard to provide cryptographic proof of identity. The keys, such as those sold by Yubico, can be registered to an account through the two-factor authentication settings in the security menu.

Facebook does already offer two-factor authentication as an extra security measure, with account holders able to use the Facebook app to generate a code or to have one sent in a text message to their phone. However, if you are looking for a stronger form of authentication, the security key is the way to go.

While the additional security is useful, it does have its limitations in terms of compatibility. Safari is not a supported browser, so macOS users will have to use Opera or Chrome to log in using a security key. In addition, this method will not work when you use a mobile device, like an iPhone or iPad.

If you want to take advantage of this new security mechanism, you will have to buy a physical key, which for Yubico’s supported YubiKeys start from $18 for a basic key. Some of the more expensive keys also include NFC, which can be used to authenticate with the Facebook mobile site on an Android device.