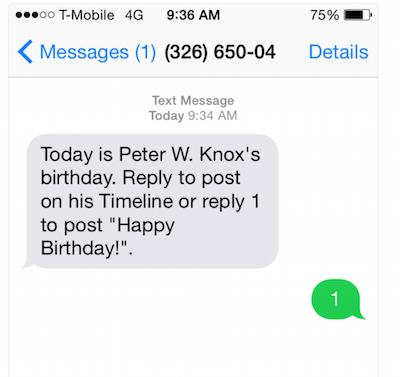 A new feature that comes as a part of Facebook’s SMS notification functionality, allowing users to interact with the site through text messages, has brought the ability to post a birthday wish to a friend’s timeline by simply replying with ‘1’ to a Facebook’s SMS reminder. As pointed out by The Guardian, Facebook has been rolling out the insta-reply feature for birthdays over the past few months, something that has made birthday wishes even more meaningless.

By default, Facebook will text you if you get sent a message, if you receive a friend request, if someone comments on your status updates and timeline posts or for “everything else”. That latter category has for a long time included birthday notifications, something which there are endless complaints about online.

Our advice? If someone posts “Happy Birthday!” on your timeline with that exact capitalisation and punctuation, it’s probably best to unfriend them, block their numbers, and ignore them IRL. They never cared about you anyway.

Does this mean the phrase “Happy Birthday!”, especially when posted on your Facebook timeline, has now become a hollow shell?