Facebook continues to grab the attention of ever-connected Canadians. As a comScore study highlights, one out of every five minutes is spent on Facebook. What’s more important, though, from the social media giant’s perspective, is that the number of mobile app users is growing at an accelerated pace (via the Vancouver Sun). 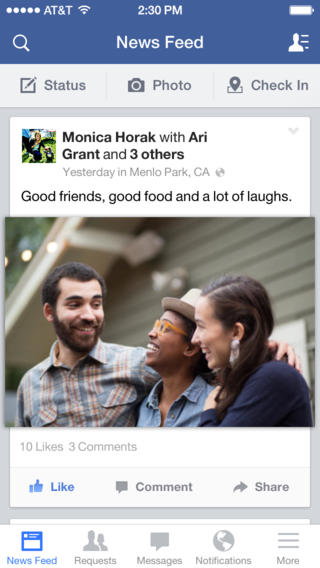 To put that into numbers: There are 19 million Canadians accessing Facebook at least once a month, and 14 million who log in each day, according to Jordan Banks, the head of Facebook Canada. The number of mobile users logging in at least once a month has grown to 15 million, and there are 10 million users (up 6% compared to August) who log in every single day using their mobile device.

“Essentially we’re getting 50 per cent of the Canadian population on Facebook every day and the exciting part for us as marketers is that when you look at the composition of how those people are accessing Facebook, it’s more increasingly on a mobile device than ever before,” says Banks.

“We’re seeing people check their phones 20 times a day for Facebook — status updates and news feed posts and checking in — so it’s really become like a Canadian reflex, if you will, to access your phone, whether you’re at a bus stop or a hockey game or sitting at home watching TV.”

Why is this important? Because mobile users generate a majority of Facebook’s revenue.

What’s interesting is that, for active users, checking their Facebook news feed has almost become a reflex.

Banks also highlighted the Facebook effect for local businesses: About 70% of North American users who log in monthly have willingly connected with a local business, and a majority of Canadian businesses are now using Facebook for marketing.

Apple Watch Ultra, Apple's most premium smartwatch to date, officially launched on Friday. The new high-end smartwatch targets extreme athletes, and it comes with a choice between three different bands to aid in their adventures: the Alpine Loop, the Trail Loop, and the Ocean Band. Each of the three band types was thoroughly tested and...
Nehal Malik
42 mins ago

According to a report from The Verge's Umar Shakir, a firmware update Apple started rolling out for AirPods Max in May significantly reduces the strength of the premium headphones' Active Noise Cancellation (ANC), according to his observations. Apple's most expensive AirPods have pretty strong ANC. It is (or at least was) strong enough that some people...
Nehal Malik
49 mins ago