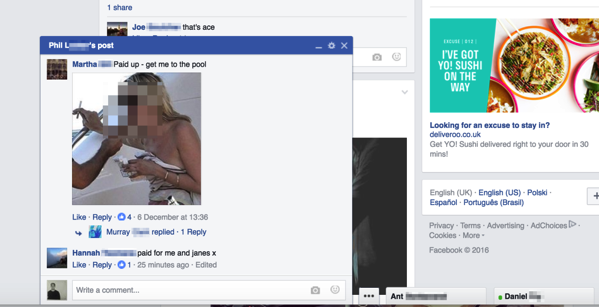 As reported by TechCrunch, some Facebook users are starting to see comments appearing as “persistently visible chat windows” that pop up on the desktop version of the site, similar to traditional message threads. Turns out the social networking giant is indeed testing this new feature on desktop for select users. Here’s how a Facebook spokesperson explained the new feature:

“We’ve heard from people that they would like an easier way to participate in conversations on a post while they are still in News Feed so we are testing a new option that opens up a window when someone comments on your post, replies to your comment or tags you in a comment. You can always hide the conversation or turn off notifications from within the dropdown menu of the post.”

Apparently if a user only comments on a thread that you’ve already commented on, the message thread will appear minimized rather than overlaid on your Facebook screen, thus keeping the feature from becoming annoying. Although it still may become intrusive for some users over time.

Do you think the chat windows would come in handy for sending those rapid-fire comments?