Facebook Dating is the company’s take on Tinder, which launched back in September first in Colombia. Now, the dating feature is expanding to North America for the first time, with Canada getting access first.

According to the social network, the dedicated feature will be located within the Facebook app, “designed to give people full control of their experience,” with matchmaking based on preferences and interests.

Facebook says their Dating feature is a “dedicated space” inside their app, and dating activity is not shared to your Facebook Profile, News Feed or anyone else’s.

Users can manage who can see their Dating profile, while only suggested matches and those you are suggested to can see your profile. Current Facebook friends and people who have been blocked won’t be suggested.

Facebook Dating allows you to opt-in to Events and Groups, to view other fellow daters who have also opted in, based on your preferences.

There are also enhanced privacy controls, with the ability to include or hide friends of friends in your pool of suggested Dating matches, while people can be reported or blocked at any time. 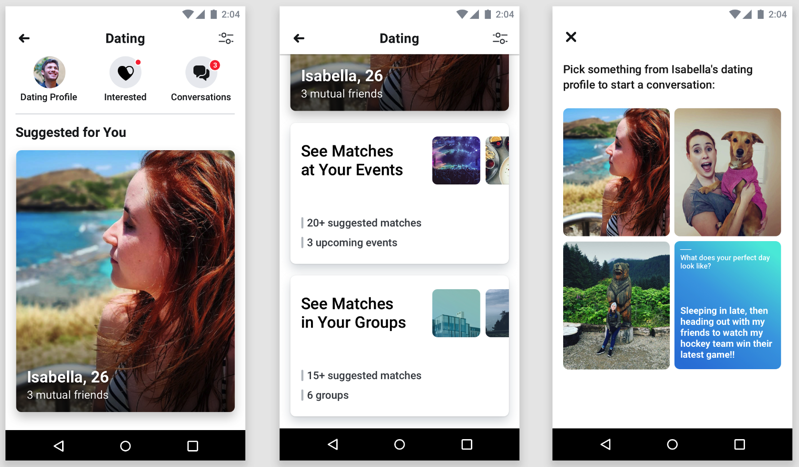 New features in this Canadian launch of Facebook Dating include Second Look (in Dating Settings), which lets you go back and check out a possible match you may have accidentally skipped.

Pause matching means Facebook Dating will stop sending new potential matches, while you won’t be suggested either. However, existing contacts can still be communicated with.

You’ll now also be able to review a blocked list, all in one place, while a new pre-emptive block list is being worked on, to let people block people they may not be friends with on Facebook, from showing up as suggested matches.

For profile content, more pieces of information can be clicked on to start a conversation, such as a shared hometown or school. Before, only Dating Questions could be used to start new conversations.

Charmaine Hung, Technical Program Manager for Facebook Dating, told iPhone in Canada in a statement,  “More than 200 million people have listed themselves as single in their relationship status on Facebook. We view this as an incredible opportunity to continue helping people build relationships in meaningful ways on Facebook.”

Let us know if you’re seeing Facebook Dating live in your Facebook app, and if you’re going to give it a try.