Facebook to Start Rolling Out Instant Games on Messenger on iOS

Facebook has announced today that it is rolling out Instant Games on Messenger “more broadly” for its 1.2 billion user base, alongside launching the new features that were previewed to developers earlier at the annual F8 conference (via VentureBeat). 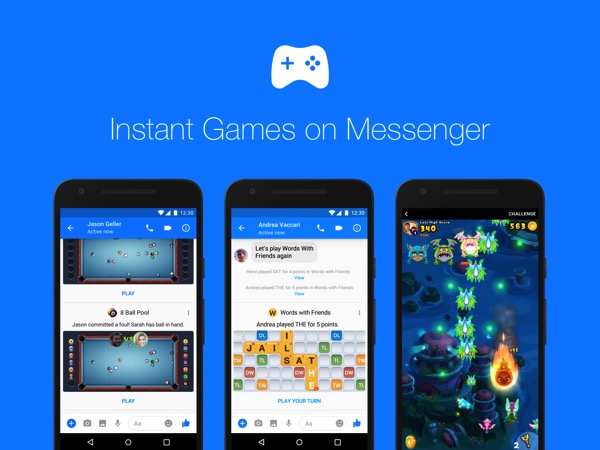 This includes rich gameplay features allowing developers to create unique experiences and Game bots to help game developers introduce features such as new levels and rewards. Among the most requested and now available features is turn-based games. Game bots help re-engage players by calling out new game options and encouraging competition with updates on the leaderboards, Facebook promises.

Among the first games to take advantage of the gameplay feature is the ultra-popular Words With Friends by Zynga: This game is now available as a feature-rich, turn-based game in Messenger.

But that’s just one of the many available: Blackstorm’s EverWing will be among the first to use Game bots, for example. Depending on the device you are using and your location, there are up to 50 games titles available in Messenger, and more will be introduced almost every week.

The Instant Games on Messenger feature is rolling out worldwide over the next few weeks on both iOS and Android.

Apple on Monday evening announced the best apps of the year, as part of its annual App Store Awards for 2022. These awards highlight 16 apps and games that “inspired users to engage more deeply with the world, expand their imaginations, and stay connected to friends and loved ones.” Winners were chosen by Apple’s global […]
Gary Ng
57 mins ago