In the latest update of Facebook for iPad, a new channel for entertainment and game discovery has been introduced. The new feature, which is initially rolling out in the U.S., will show related content on the right-hand side of the iPad once users rotate their iPad to landscape mode, including news, videos and new games.

“More than 70 percent of people who use Facebook for iPad worldwide played a Facebook-connected game in the past 90 days. So we’re also dedicating a section of the iPad app to games people play, and over time, we will include ads where game developers can engage players.”

In addition to News Feed featuring birthdays and events, the new right-hand column will show Trending Topics, Trending Video, My Games and Popular games. For game developers to be eligible to be featured in the Facebook for iPad app, they need to register their iPad app with Facebook, integrate Facebook Login and upload a video to the App Center. 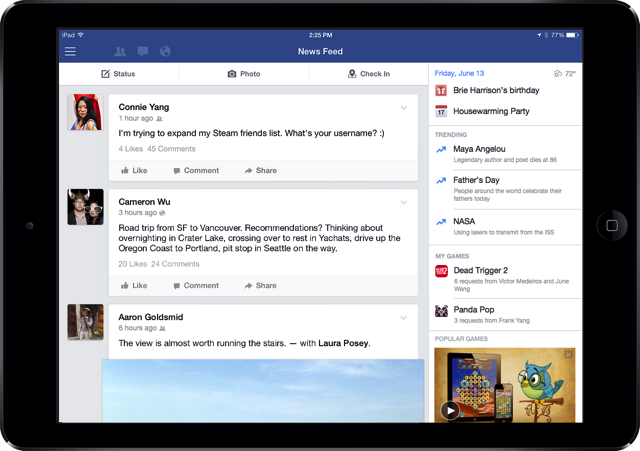 Here’s what the new Facebook for iPad column will show:

The free update will soon hit the Canadian app store so, stay tuned.