Facebook has introduced a new featured in its iOS app and on the web called Find Friends Nearby, a tool to enable you to locate people you know nearby, notes TechCrunch. Facebook engineer Ryan Patterson created the app–he responded in the comments to clarify the feature and remarked the it was initially named ‘Friendshake’:

I built Find Friends Nearby with another engineer for a hackathon project. While it was originally called ‘Friendshake’, we settled on ‘Find Friends Nearby’ for launch (the URL was a little bit of a homage to the previous iteration).

For me, the ideal use case for this product is the one where when you’re out with a group of people whom you’ve recently met and want to stay in contact with. Facebook search might be effective, or sharing your vanity addresses or business cards, but this tool provides a really easy way to exchange contact information with multiple people with minimal friction.

How to check out the new Find Friends Nearby feature? Easy…

On the mobile web: http://fb.com/ffn

Here’s a screenshot of the Find Friends Nearby page in action from the iOS app: 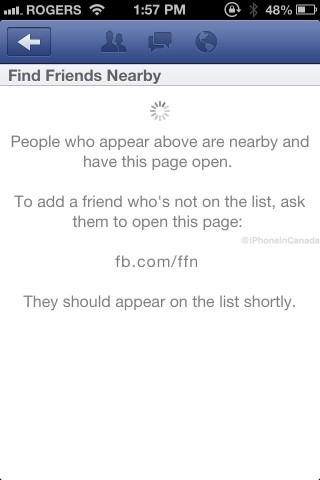 This reminds me of Apple’s Find My Friends, but without maps involved. Let us know if you find this feature handy, and how it works for you.