Facebook Messenger Gets New Sharing Features for the Holidays 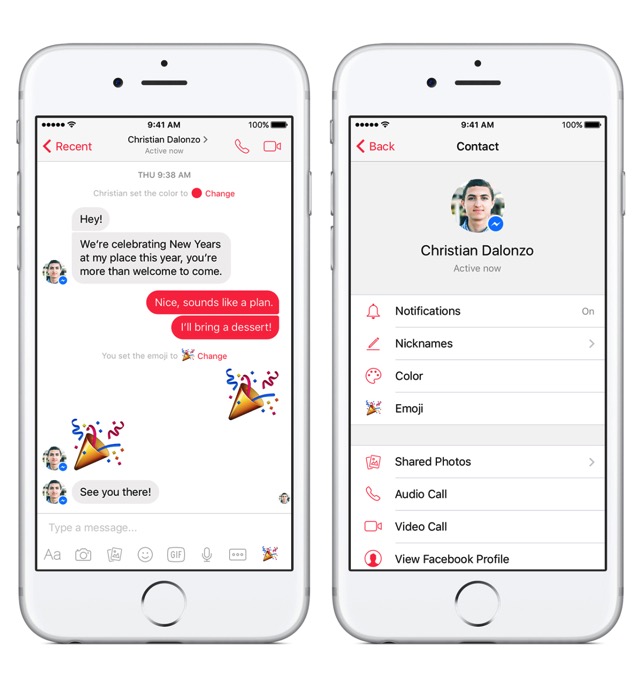 Facebook has today announced that over the next few days, it will be rolling out some new features for sharing during the holidays, making it easy for users to surprise and delight their loved ones. Facebook’s Photo Magic feature, which has been in beta for the past month or so, will now be available to more users as well. The feature automatically recognizes friends in your photos and lets you share them via Facebook Messenger in just two taps.

To enable Photo Magic, go to your “Settings” menu in Messenger, where you’ll also be prompted to try Photo Magic. Simply select “Try It” and you’re good to go. Once you take a photo with your friends, you’ll get a reminder to send the photo to them. If you choose not to share the photo, hit “Cancel”. Furthermore, Facebook is rolling out new fun ways to customize your conversations with different people and groups.

With various color choices, emoji and nicknames, now you can really make Messenger your own space. For iOS, tap on the people’s names at the top of a conversation to change your family group thread to a festive red, update your mom’s formal first and last name to just “Mom,” or change the emoji response in your holiday meet up group from the thumbs up to something more timely, like a party hat

We’re constantly thinking about ways to surprise and delight you and your friends. And now for the holidays, we’re bringing the prettiest snowflakes to your messages.

Let us know if you enjoy using these new features this holiday season.

Twitter Blue has once again been working on bringing its edit button to the fold. In a new tweet, the premium subscription of the social media platform shows off how the edit function will work both in terms of the user tweeting as well as the general audience seeing the changes. Earlier in September, Twitter...
Steve Vegvari
19 mins ago