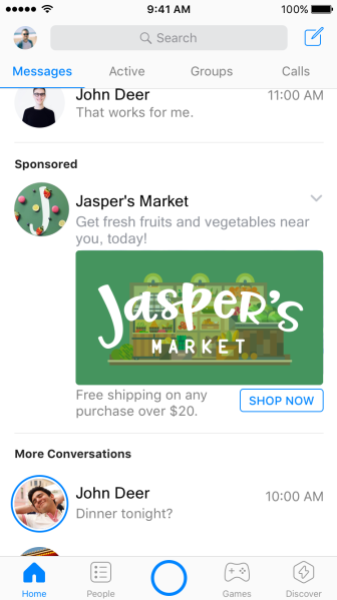 Facebook Messenger’s head of product Stan Chudnovsky has today announced that the company will be extending its Messenger home screen ads beta program worldwide in the next few weeks. While speaking with VentureBeat CEO Matt Marshall  at MB 2017, Chudnovsky said that advertising is how the social networking giant is going to be making money right now.

“[Advertising is] not necessarily everything, but it’s definitely how we’re going to be making money right now. And going forward, there are some other business models we are exploring as well, but they’re all around ads one way or another,” Chudnovsky told VentureBeat in a phone interview.

Ads in the Home tab will follow an auction-based model and will feature the same sort of user-targeting capabilities found on Facebook or Instagram, Chudnovsky said.

The home screen on Messenger acts as an inbox for your most recent conversations with friends, automated bots, or brands. Chudnovsky says the move to home screen ads brings Facebook Messenger closer to its true business model i.e. advertising. The beta in Thailand and Australia sent ads to nearly all Messenger users. Most Messenger users elsewhere in the world could begin to see advertisements on their home screen by the end of the year, said Chudnovsky.

While Chudnovsky revealed that Facebook is “agnostic” about whether an ad leads to a web page or a destination outside of Messenger, he said that the best experiences come from opening conversational threads inside the chat app.