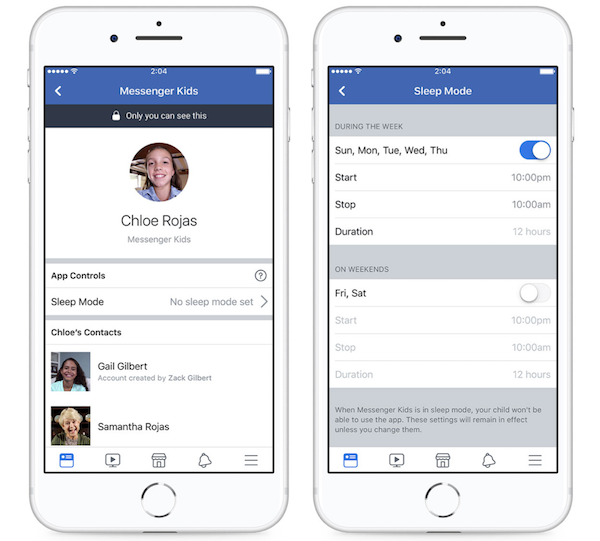 In an effort to make Messenger Kids even safer for children to message and video chat with close friends and family, Facebook has introduced a new ‘Sleep Mode’ for the app. The new feature lets parents set predetermined “off times” for the Messenger Kids app on a child’s device, giving them more control over the popular messaging app.

“Parents have told us that they like how Messenger Kids allows them to fully control the contact list and check in on their child’s messaging as they’re learning to navigate the digital world. But parents also told us they would like controls that make the app inaccessible at a certain time, like during dinner, homework time or bedtime. We took this feedback to heart and built a feature that gives that level of control to parents.”

Using the Sleep Mode, parents can set a designated off time and each day at the designated time, the app will automatically go to sleep and will not be accessible to kids during those hours. Parents can control the Sleep Mode from the Parent Control center in their own Facebook account, and can easily change the off times at any time.

Here’s how you can set up the Sleep Mode in Messenger Kids:

Go to the Messenger Kids controls in the main Facebook app. Tap on the child’s name, and then on “Sleep Mode” in the App Controls section.

Set the times you want the app to turn off for your child. You can set different times for weekdays versus weekends.

Have a conversation with your child and let them know that you’re setting limits for them on Messenger Kids.

Let sleep mode do its job. When the app is in sleep mode, kids cannot send or receive messages or video calls, play with the creative camera, or receive notifications.

Amazon announced an all-new Alexa experience built just for kids today, with the launch of Echo Dot Kids. Echo Dot Kids come with Owl or Dragon designs and a 2-year worry-free guarantee. If your speaker breaks, Amazon will replace it. Also included are parental controls (time limits; explicit lyric filtering) and one year of Amazon […]
Gary Ng
22 mins ago

[caption id="attachment_382288" align="aligncenter" width="1920"] Image: @OnLeaks and @Smartprix[/caption] Samsung's upcoming flagship smartphone, the Galaxy S23 Ultra, has just leaked in high-resolution renders that reveal its design and more. The leaked renders come from Smartprix and known tipster @OnLeaks. Samsung is months away from actually unveiling the Galaxy S23 series, which is being developed under the...
Nehal Malik
35 mins ago