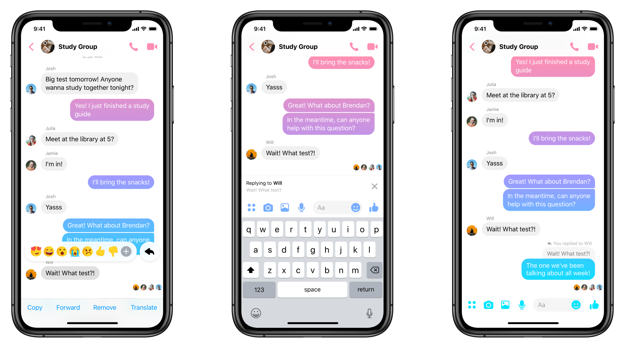 Facebook has today started rolling out a new feature dubbed “message replies” to over 1.3 billion Messenger users worldwide. As detailed by VentureBeat, the new feature is basically threaded messaging that makes it easier to reply to your friends’ messages, without interfering with the original text thread.

The feature allows you to long-press on the text to which you want to reply and then tap on ‘Reply’ to respond by sending individual GIFs, videos, emoji, text, and photo messages. Since the replies don’t interfere with the text thread, the original message remains visible after it’s been responded to.

The launch of message replies follows Facebook’s earnings call during which CEO Mark Zuckerberg told the investors that the company was committed to making more of its products ephemeral, in response to growing user demand:

“It also follows a year in which Facebook recommitted to “streamlining” and “simplifying” the Messenger experience. In a blog post published last January, former Messenger chief David Marcus conceded that the service had become cluttered with new — albeit in some cases welcome — features like chat extensions and expanded peer-to-peer payments.”

An interesting report from AppAnnie release earlier this year showed that as of late 2018, WhatsApp had more monthly active users on Android and iOS than the main Facebook app itself.