Update 1: Facebook Canada’s PR company contacted us and clarified these new filters are only available to camera phones (non-smartphones):

We just wanted to clarify this was just an announcement for the Facebook for Every Phone app which is only for camera-enabled feature phones.

According to a post on the Facebook Brazil page, upcoming versions of mobile apps will include filters such as sepia and black and white, as noted by The Next Web. The translated post reads:

“As part of our efforts to establish a better Facebook experience in all types of phones, we are very happy to announce that the Facebook application to any device now has filters sepia and black and white to your photos. Take a picture, play with the new filters and share them with your friends directly from your application.” 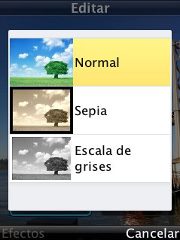 It was also noted the New York Times reported Facebook was working on filters back in August of 2011:

The engineers said Facebook will introduce almost a dozen photo filters, including some that are similar to Instagram like old-style camera lenses and grainy film. Facebook will also try to introduce new styles of filters with the hopes of drawing users away from other photo apps.

The engineers also said that Facebook attempted to acquire Instagram over the summer, but to no avail.

So it appears Mark Zuckerberg attempted to acquire Instagram since last Fall, but was only able to successfully negotiate a $1 billion dollar deal last month. There’s no word as to whether we will see Instagram-like abilities integrated into the Facebook app, although it would seem like the inevitable solution.

While we’re on the subject of Facebook iOS apps, 9to5Mac reveals an upcoming version will soon support Skype video chat. By tapping on the arrow of a contact’s name, it will initiate a video call. Furthermore, they also got their hands on a separate version of Facebook Messenger for the iPad.

Looks like we have some big Facebook iOS updates coming our way. It was revealed in Facebook’s IPO filings they now have over 500 million mobile users.