Facebook has announced that it is rolling out a number of ways for its users to show support for their favorite teams plus track the Olympics news they care about in a dedicated section of the News Feed, TechCrunch is reporting. The social network is also bringing Profile Frames and photo filters for the Olympics. The frames are branded with the Rio 2016 logo while also allowing you to show your support for your country or favorite teams. 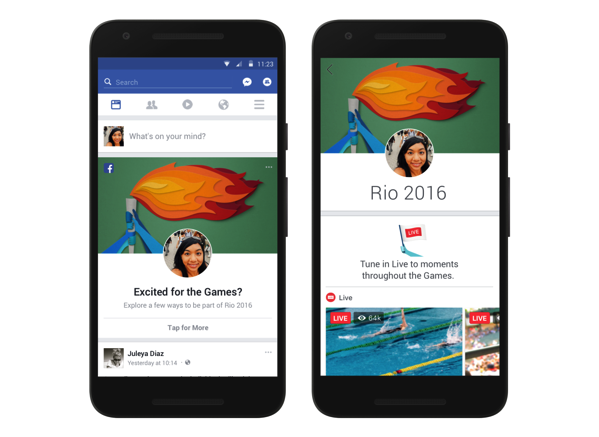 From August 1st through August 5th, Facebook will greet users with an Olympics illustration and message at the top of their News Feed. Olympics Profile Frames will let you place a custom frame around your Profile picture on Facebook, and will arrive by the end of the week. Meanwhile, Facebook is also rolling out country flag masks which you can overlay on your photos or videos starting today.

“Excited for the Games?,” followed by a prompt to explore on your News Feed.

You may have already seen this greeting and ignored it, thinking it was just another of Facebook’s prods to get you to share. But instead, if you click through, you’ll be taken to a page that offers a “dynamic” mix of Olympics content, including Olympics-themed search results and conversations, as well as Events, Live Videos from Rio, and more which are personalized to you.

Facebook will also send out a similar greeting on August 21st for the Closing Ceremony, it says.

Keep in mind that if you dismiss the above greeting and it disappears, there’s no obvious way to find your way over to this Olympics page again.