A new desktop-only “Facebook Professional Services” site on Facebook has just been uncovered by acodez.co.in (via Search Engine Land), which hasn’t yet been officially announced by the social networking giant. It is being assumed that the company may be looking to take on local search companies like Yelp and Google by offering listings of local businesses and services. 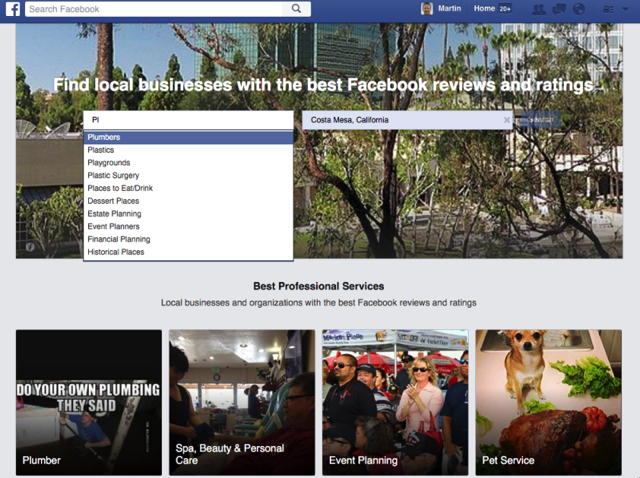 When you visit the desktop URL Facebook.com/services, you are presented with a page that has your current location preselected. You can make searches within that area by typing into a dialog box that serves up business categories like plumbers, dentists, photographers, beauty salons, pharmacies, pizza places etc. There are at least 85 business types in an “Explore other services” section, and even more suggestions appear when you start typing into the search box.

Search results are displayed in a way that takes Facebook’s five-star rating system into account, but results aren’t strictly ranked by how many stars a business averages. Given Facebook’s deep knowledge of individual preferences, results are likely customized for users depending on their previous interactions with a business’s Page or whether someone they are connected with has reviewed a business on Facebook

The results page displays businesses’ contact information and hours of business, and excerpts of reviews. The services results page also includes a map that shows where businesses are located and links to similar businesses in adjacent areas.

It is not yet known whether the company plans to debut Professional Services as a standalone feature or whether it will integrate it with Facebook Places, the social network’s local search directory. Our quick test of the feature showed some promise, accurately showing local businesses that had Facebook pages and reviews.

Back in October, Apple confirmed its head of hardware design, Evans Hankey, was departing from the company after just three years of replacing the famed design chief Jony Ive. Now, Bloomberg’s Mark Gurman reports Apple won’t be replacing the coveted design chief role, but instead having its entire team report to the company’s chief operating […]
Gary Ng
14 mins ago