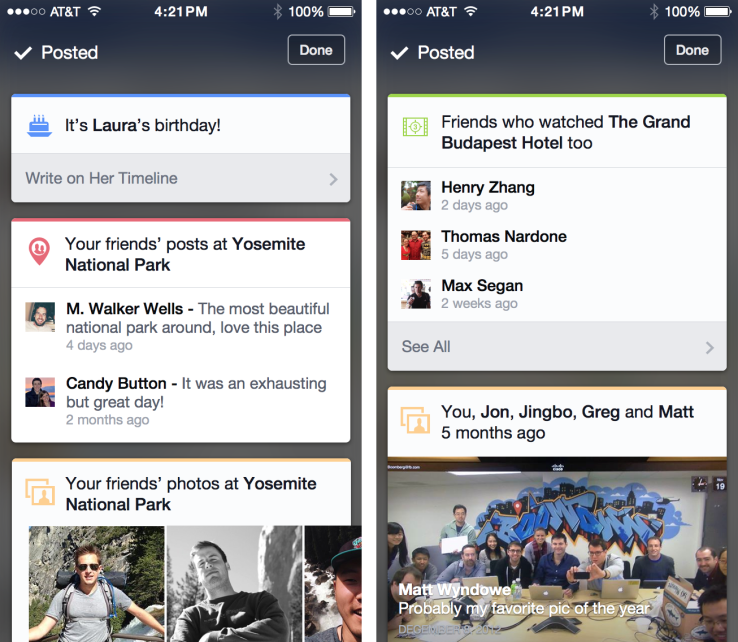 According to a report from TechCrunch, Facebook has started to test a new feature in its iOS app, which brings Google Now-like contextual cards to the companies mobile app.

The new feature, which is currently appearing to a few users of Facebook’s mobile app, shows relevant information after you check in to a location, or attach a song, friend, TV show, or a movie to your status update.

For example, if you post a status update about your friend it may show you the user’s birthday, recent location that he/she checked in, or recent photos uploaded by that user.

The contextual cards are meant to give you relevant information based on the activity you are currently doing. The new feature feels very much like a condensed version of Google Now that was designed for Facebook, however, the company is focusing on your friends and trying to get you to start conversations about content found on their social network. Facebook told TechCrunch:

“These cards can help you discover information about where you are or what to do next, or inspire conversations with your friends around you.  This feature respects all existing privacy settings, and the card will only show you information that you could already see elsewhere on Facebook. We wanted to make it easier for you to interact with your friends about the things you’re doing and the places you are visiting.”

Today Facebook released version 10.0 of their iOS app (first reported by TechCrunch), which is believed to hold the card tests (for a small group of users). Here is a full list of features included in the latest version of the app:

• Review what your post will look like and choose whether to remove any suggested links before sharing what you’re reading, watching or listening to

Currently the cards are only for tests, but if the company sees a growth in engagement it is likely that they will roll out the feature to more users.

What do you think about the idea of contextual cards in Facebook and would the new feature prompt you to use the service more than you already do? Let us know in the comments below.

The Canadian Radio-television and Telecommunications Commission, the country’s broadcasting and telecommunications regulator, announced on Monday morning its website and phone lines are down for the count, in what appears to be an unscheduled outage. “Please note that our website, its related applications and phone lines are temporarily unavailable, we will update you as soon as […]
Gary Ng
21 mins ago