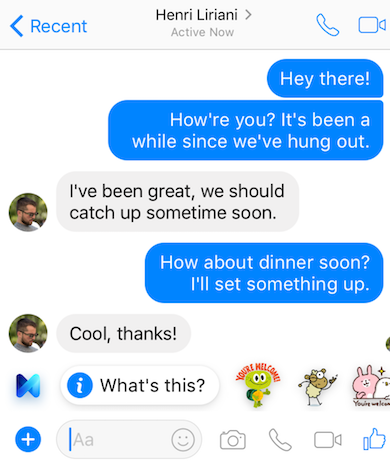 Facebook has started testing a new “M suggestions” feature for select users in the US, that will perform certain actions based on the context in conversations within the Messenger app (via BuzzFeed). The new feature, that will suggest things like sending a location when someone asks “where are you?”, could well lead to a much bigger role for M, its virtual assistant for Messenger.

“Think of this as a version of M that can actually help suggest the right capabilities at the right time,” Messenger head David Marcus told BuzzFeed News. The virtual assistant version of M has been in tests for over a year and still has no set date for a bigger rollout, but Marcus said Facebook wants to bring it to the public. “M suggestions,” if rolled out more broadly, could help push the schedule up a bit.

“Hopefully with this side of it, we’ll have a path to opening it up to everyone fairly quickly,” Marcus said.

Marcus added that other suggestions Messenger currently makes, such as event reminders and ride hailing, will be rolled under the “M suggestions” umbrella as well. It must be noted however that Facebook needs to fully understand what you’re saying in messages, in order to make sure its suggestions aren’t annoying. “It seems completely pedestrian, but it’s actually very hard to do,” Marcus said. He also said that the technology adjusts its suggestions based on how a user interacts with M.

Facebook says it is hoping to expand “M suggestions” to a wider user base in the first half of 2017.

Netflix has announced today they are rolling out the ability to great game handles, which are public usernames that can be used across the company’s slate of mobile games on iOS and Android. Supported games will have leaderboards such as Rival Pirates, Dominoes Café and Lucky Luna. How to create your Netflix game handle? It’s […]
Gary Ng
58 mins ago